Work started at the northeast corner of the UP College of Education in May 2015 that very few may have noticed. Fewer still may know of the vertical rock column that was raised there some 16 years ago in the aftermath of a gruesome murder.

On February 19, 1999, Nino Calinao, a senior UP Journalism student was shot and killed after being mistaken for a member of a rival fraternity. It was an atrocity further aggravated by the victim’s circumstances — a son of a jeepney driver who was the brightest hope of his family to ease out of poverty. It was also the latest tragedy in many decades of fraternity-related violence within the UP campus, and unfortunately it would also not be the last. In that moment at least, the appalled UP community found itself gathered in a common ground as the resurgence of campus violence was denounced collectively.

The UP Alpha Phi Omega found parallels that ran close to home. They too lost one of their own, 5th year UP College of Engineering student Rolando T. Abad, in a similarly senseless act on August 30, 1977. This fueled their drive to put up a symbol that will remind one and all of the need to end the cycle of violence.

They found a kindred spirit in then UP College of Education dean Dr. Leticia Ho, who supported their idea to raise the Peace Rock at the northeast corner of the Benitez Hall, to kick-off a campaign calling out the culture of violence corrupting the fraternity system.

In the years that followed, the reason for the Peace Rock’s placement has all but been forgotten. While the resident members of UP APO have been conducting periodic cleanups of the area, lack of practical use for passersby has left the Peace Rock and what it advocates largely ignored.

On April 20, 2015, current UP College of Education dean Dr. Rosario Alonzo endorsed the proposal to improve the Peace Rock. Eight benches were added, strategically designed and placed so that respect for personal space is enhanced. Facing inward, the center of each bench can also serve as a table for laptops or lunch boxes. Paved walkways provide easy access to and from the college’s laboratory school, the UPIS, as well. A drinking fountain, too, offers relief for the parched UP scholar.

The iconography of the dove as a messenger of love, peace, and hope is universal. On top of the Peace Rock is a rendition with an olive branch, created by sculptor Ral Arrogante. The artwork has been ingeniously put together from copper discards and has no welded parts, a trademark of the artist.

The oblique placement of the Peace Rock in a bed of river stones points to the role of peace in the university — not as an end in itself, as might be interpreted had it been in the center, but as a means for the various disciplines, represented by flow-shaped stones, to flourish.

The hope is that the Peace Rock will serve as a constant reminder for campus organizations of their responsibility, to their members as well as the academic community, to always strive to support an atmosphere conducive to learning, research, and innovation. 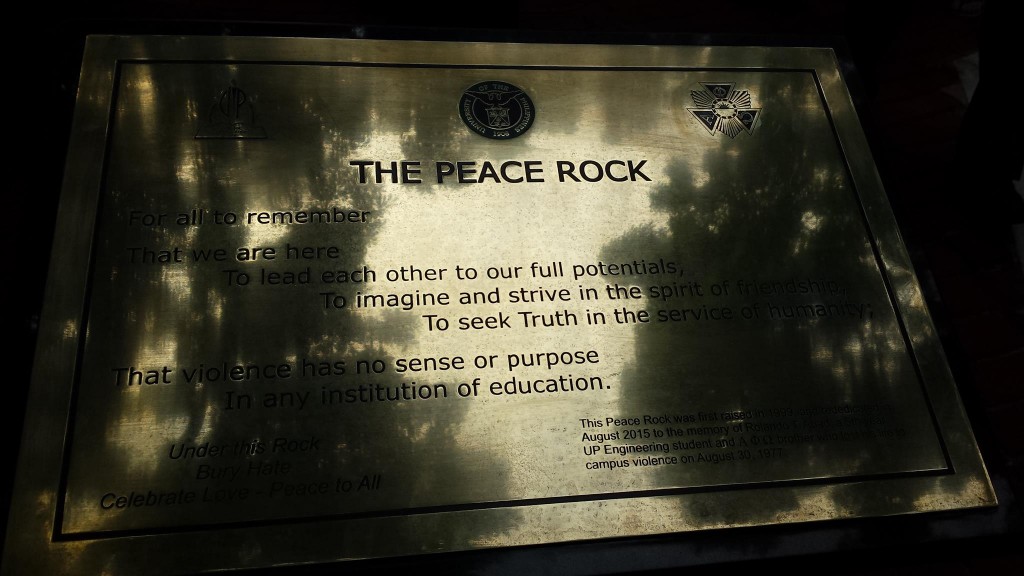 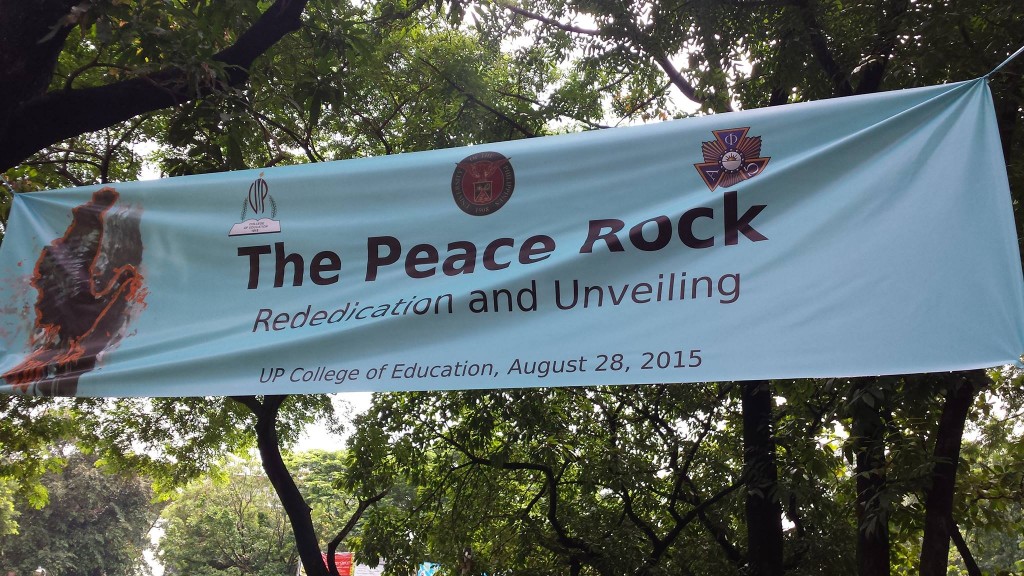 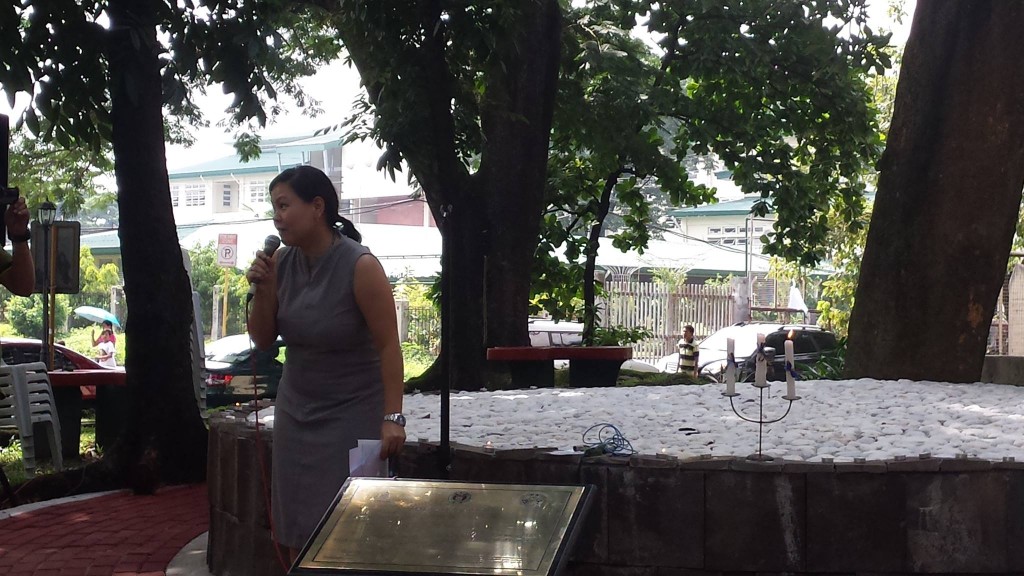 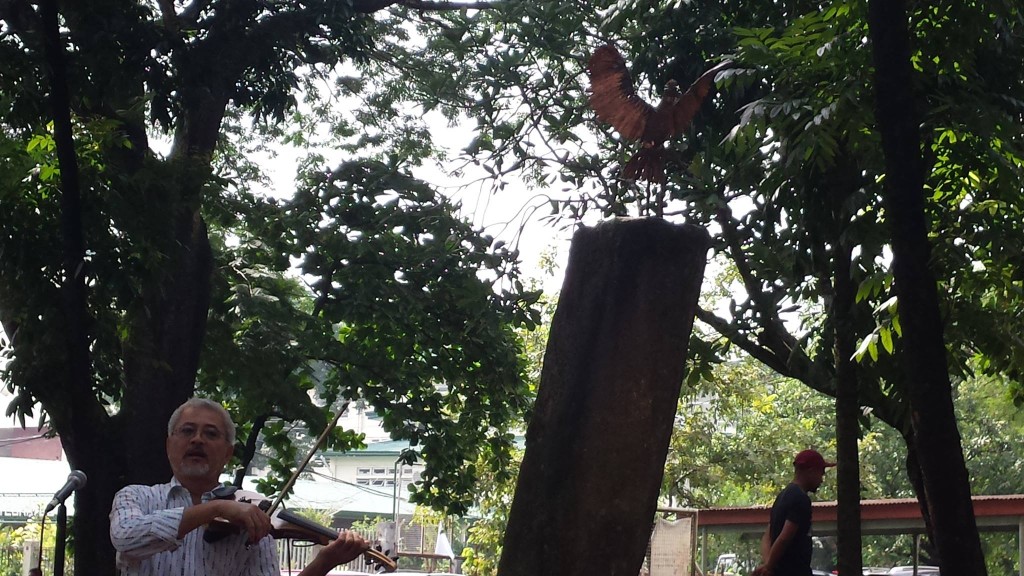 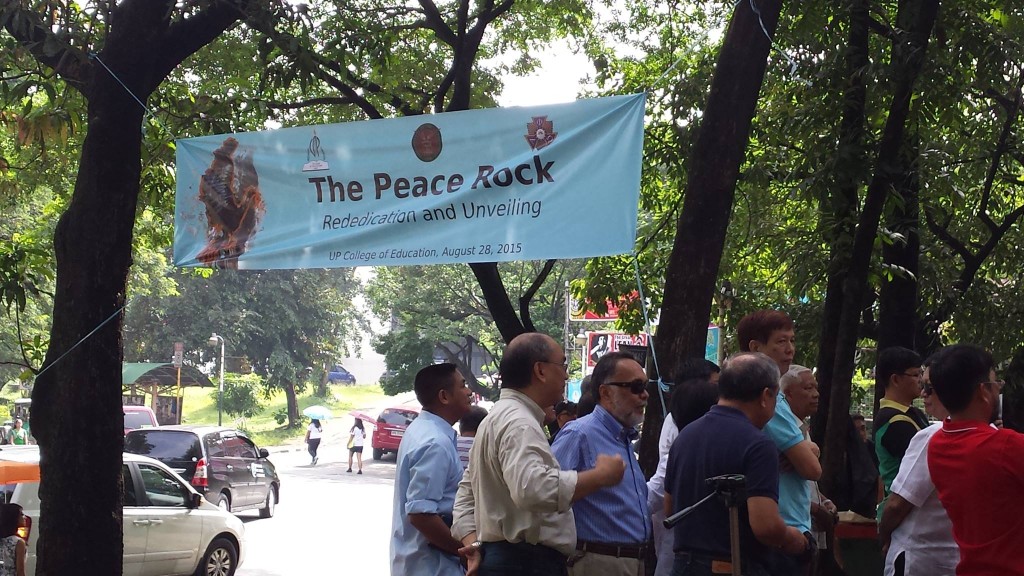 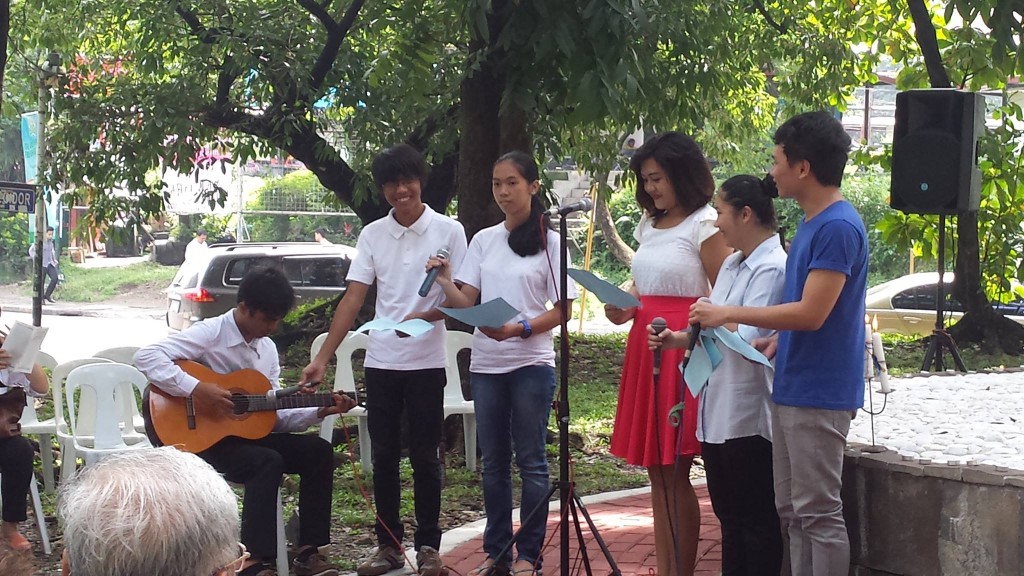 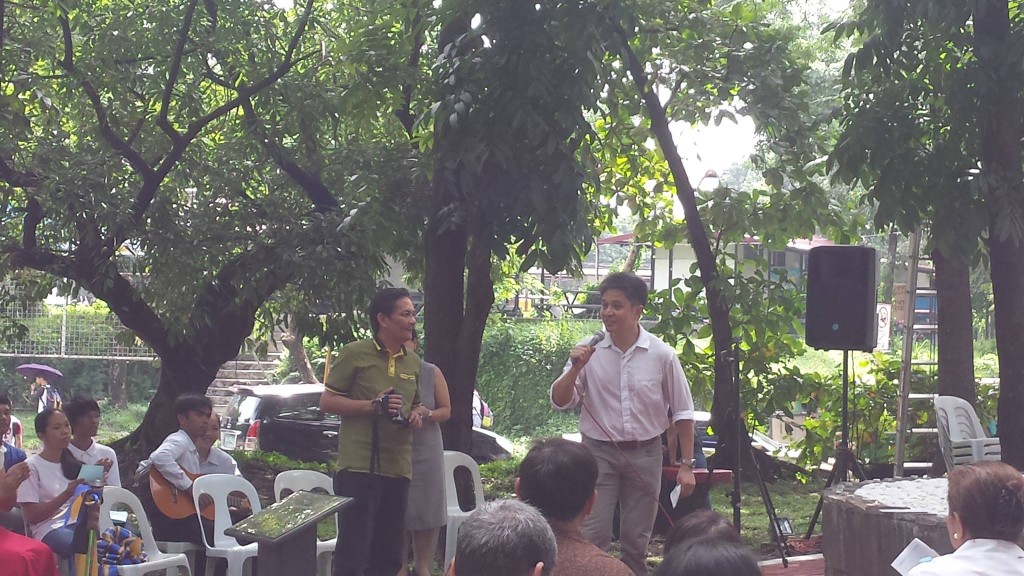